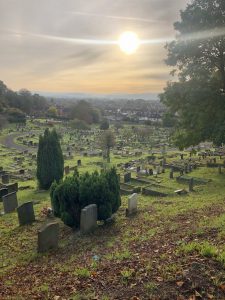 The charming neo-14th century Gothic Chapels and Upper Gate Lodge were built in pink Carboniferous limestone quarried on site, with buff Bath stone for mouldings. Originally there were two adjoining chapels for Church of England and non-Conformist services, though the latter was demolished in 1980. The tower surmounted by an octagonal spire houses the chapel bell and was deliberately aligned in front of the top entrance gate.

The Lower Gate Lodge and entrance in Milton Road were part of the Ashcombe House estate becoming cemetery property only when burial facilities were extended downhill in the 1930s.

With help of the Heritage Lottery Fund, the restoration of the Chapel’s Bell Tower and the re-hanging of the Bell were completed in November 2010. The Chapel now houses small exhibitions which have been organised by the Friends of Milton Road Cemetery and provided by Worle Community School as part of their enrichment week.

An Introduction to Milton Road Cemetery

Read more about the history of Milton Road Cemetery

Read more about the nature at Milton Road Cemetery

We acknowledge the importance of a memorial as a means of commemorating the life of a loved one, acting as a focus for grief initially and, in years to come, as an historical record. Due to this, we adhere to a strict code of regulations (click here to download the PDF, 258Kb).

The cemetery will be closed during the time of a funeral service and will reopen once the service has completed.

Due to Covid-19 we are stipulating that numbers need to be limited for funeral services in our cemetery. If you are arranging a funeral our staff will discuss with you at the time of booking.

Any cookies that may not be particularly necessary for the website to function and is used specifically to collect user personal data via analytics, ads, other embedded contents are termed as non-necessary cookies. It is mandatory to procure user consent prior to running these cookies on your website.